CIP is in SL this year 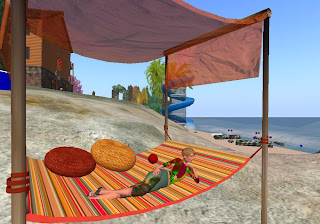 In just a week I am speaking at the Center for Intellectual Property's Annual Symposium, and this year it's being presented in Second Life as well as first life. I am planning to visit the NMC Conference Center where the event will take place, so I decided to dust off my avatar (Gee Susanti), make a new outfit (no spiffy $ duds, just the basics) and wander around a bit. I found this great hammock by the beach (well everything's by the beach in SL). I don't anticipate the Conference Center will have a hammock by the beach, but you never know. Anyway, maybe I'll see you there!
Posted by Georgia Harper at 8:04 AM No comments: Links to this post

April is the most beautiful month of the year here in Austin (my humble opinion, obviously). If it lasted all year, that would be fine with me. Well, not really, but I do enjoy spring, or rather, I used to enjoy spring. Somehow or another, being in graduate school has changed that. I'm thinking maybe that's too big a price to pay for a Ph.D. No more loving spring. No, I do not accept that.

People here joke about how awful April is: "April is the month we eat our young." I'm not kidding. This I heard here at UT. The horror of April is not just a myth. I experienced it first-hand this year. I was really on edge. Hair-trigger temper. Flare-ups were common. Old friends sharp with each other. Major decisions made as snap judgments. Geez. This is not right. This level of tension is not really conducive to a what really should be, at heart, a thoughtful process. Over 18 years of working as a lawyer, and having gone through quite a few stressful times, I must say that I don't recall very many that were as bad as this April was.

If it's this predictable, then it should be preventable, or at least manageable. But this is no more and no less than what I learned about balance this semester, this brutal academic year -- it's all in what you commit to do, what you believe you can plan to accomplish. You have to consider each commitment very carefully and recognize that you'll have to say no to some things way before you experience the pressure that results from having over-committed. You have to believe what you really don't want to believe: that you won't be able to do everything you want to, without unacceptable compromise of your sanity, your health, at some level.

I read something recently that suggested that being over-committed has become a mark of success, or something like that. We exhibit our unbelievable lists of things that we must do, of committees we are on, of multiple jobs we have, of meetings we have to shuttle our kids to, of papers we are writing, as proof that we are successes. Who can argue with the guy who can juggle five balls? He has accomplished something real. Hardly anyone can do it. And it's not killing him. In fact, he's nodding his head side to side and whistling a tune and smiling while he juggles. But he does this as an act, a short demonstration of a skill he acquired by hours and hours of repetitious practice. This is not a way of life.

So, now it's May. Things are winding down. Classes ended on the 2nd. All but one paper is finished. Three meetings in other cities are behind me. May's not a piece of cake by any means, but it's doable. UMUC's CIP is the last week. I have until then to polish my talk and think about what I really want to say (the paper is just the beginning of the process of giving a talk, for me). Then comes June, July and August. Somehow, I am going to slow down and not set myself up for a mad dash to the end of the year.

Which brings me to my research topic. I have decided to reject for now everything I concluded through the end of April. I just don't trust any conclusion I reached by participating in a process that I think is fundamentally flawed. I have felt closer to crazy during the last 6 weeks than I ever want to feel again. I'm going to take the summer to think about it, to talk to people who aren't stressed out, to explore the options at a more leisurely pace, to be more open to changing course, to venturing into terrain that's less familiar, to maybe taking more time to unfold the story. Most of my fellow Ph.D. students seem to have these trajectories that were not straight. The process is maybe all there is. Right now I am too focused on the outcome (finishing). I know better than that. But then again, that's what April was about -- not making a lot of sense.
Posted by Georgia Harper at 7:17 AM No comments: Links to this post

Time it was and what a time it was, it was...
A time of innocence
A time of confidences

Long ago it must be; I have a photograph
Preserve your memories
They're all that's left you

Dana answered an ad I had placed in the Austin American Statesman, for a roommate. I had just graduated from UT and she was still in her junior year. She said she answered the ad because I was a vegetarian. She had an Irish Setter named Mandy. I had 3 cats. We all got along just fine, though I remember our first big fight. She locked herself in her room and wouldn't talk to me. I told her through the door that if we didn't work this out we were giving up on our friendship. We didn't give up.

Dana has been living with ALS for 2 1/2 years. This weekend she must decide for herself and her family and her friends whether to let go of her life or whether to commit to living with life-support 24 hours a day for the rest of her life, whatever that might be.

Seventy doesn't seem so terribly strange anymore, but those fears -- we are still silently sharing those. Dana doesn't talk about that. At times it takes such incredible courage to live with unbearable pain, loss, and sadness. It takes no less an amount of courage to let go.
Posted by Georgia Harper at 4:59 AM No comments: Links to this post

Georgia Harper
Turned out I didn't have a third career. There are just so many things to do that have nothing to do with careers...